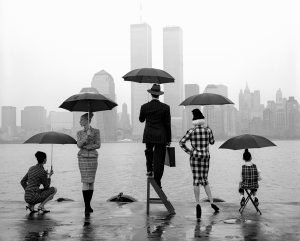 In the Spring of 1995 I was commissioned by the New York Times Magazine to do this picture. I had already done two others in this series, and by now these pictures were referred to as “the line pictures.” Earlier, I had done Hemline and Airline, and now I was asked to shoot Skyline. The only directive was to have the New York skyline in the picture.

We had found a barge that was large enough to put the crew in the middle of the Hudson River. The day of the shoot, it was raining. I remember the Art Director asking me if we should cancel and reshoot another day. I also remember feeling that shooting that day was fine, and that the rain, rather than a deterrent, was an asset. I have always liked rain. It adds an atmosphere that I am attracted to. It makes things enigmatic, dimensional, and unresolved.

It took some hours to get the barge in place, and by then it was raining quite hard. We got everyone dressed quickly, positioned the barge, and shot the picture very quickly. I remember that the barge would drift slowly, and I found myself waiting for just the right moment, when the man’s hat fell between the Twin Towers. I took a few frames and then the job was done.

As I have mentioned before, one never knows which pictures will strike gold. This picture, even before 9-11, was extremely popular, and since then has become almost an icon. The edition is almost all sold out, with only one print remaining.

Since 9-11, the picture has been purchased by people all over the world, but by no one in New York City. I used to think this strange, but I realize the events of 9-11 are still too close for those who were there. A photograph always has a history. It denotes a time and a place, and is able to halt life, if only for a second. Of all the pictures I have ever taken, this picture is marked in time forever. It is a timeline, as well as a skyline.

Sing Along with Me – The Camp Experience

A Good Bed is Hard to Find